The Ecommerce Survey is now

The June 2011 eCommerce survey of the Alexa top 1 million sites found 25,592 online stores. Magento continues to reign as the most popular platform with 4,705 sites, an 15% increase since February.

Zen Cart sees the largest gains, doubling to 3,167 sites. This results in Zen Cart becoming the second most popular eCommerce software in the top 1 million sites. This increase is predominantly due to improvements in the signatures used to detect technologies. These also led to 800 more web sites running IBM WebSphere being identified. While these two pieces of software were the most heavily affected by adjustments to the survey, improvements were made across the board.

Of all software analysed, osCommerce saw the largest loss; falling from 3,033 sites in February to 2,554 responding in this edition. 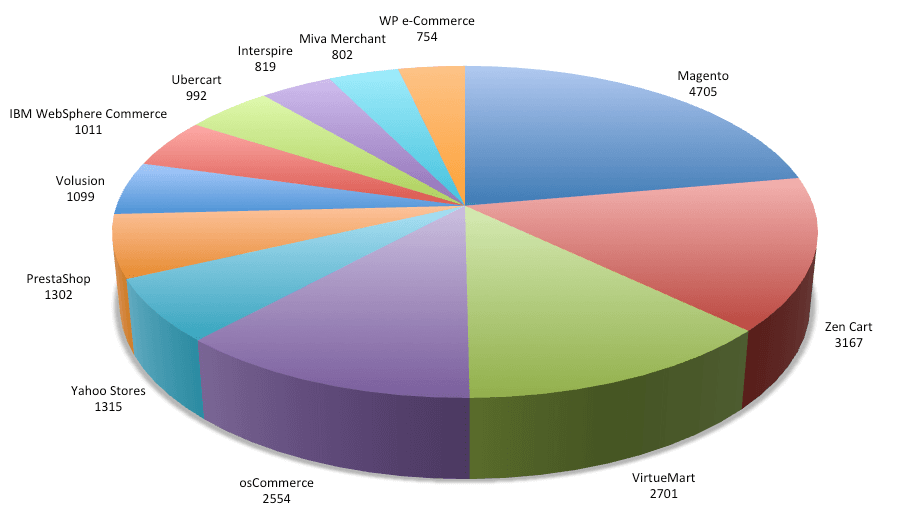 From a Magento developer’s point of view, of the 4,705 Magento sites found, 274 included indications that they were running on the Magento Enterprise edition. This month, checks were added for Magento Go, Magento’s new hosted solution. This is aimed at small and emerging retailers and therefore we would not expect many to appear in the top 1 million. Indeed, only 8 stores were found using Magento Go. The most popular of these was fkc.com, ranked around 155K busiest site. However, this store is still under construction. On the other hand, chefstore.mx is open for business but only ranked around the 800K mark.

In addition to Magento Go, a number of other eCommerce software packages were added to this survey:

As a short aside, I also repeated the analysis of HTML 5 adoption in the top 1 million. 646 of the 25,592 online stores found were using HTML 5, making eCommerce slightly below the average of 2.67% for the rest of the top 1 million.

The full results for all eCommerce software detected are provided in the table below. I’ve included the results from the previous two surveys so that growth and decline can be observed for each. I’d be interested to hear your viewpoints on any of these findings.

You know you wanted one. The graph below shows the number of sites detected for each eCommerce platform over 3 editions of the survey. All points are plotted on the same axes so that the popularity for each platform can be more easily compared. From this we can see just how much the leaders, Magento, Zen Cart, VirtueMart and osCommerce, are dominating in terms of sheer number of stores. 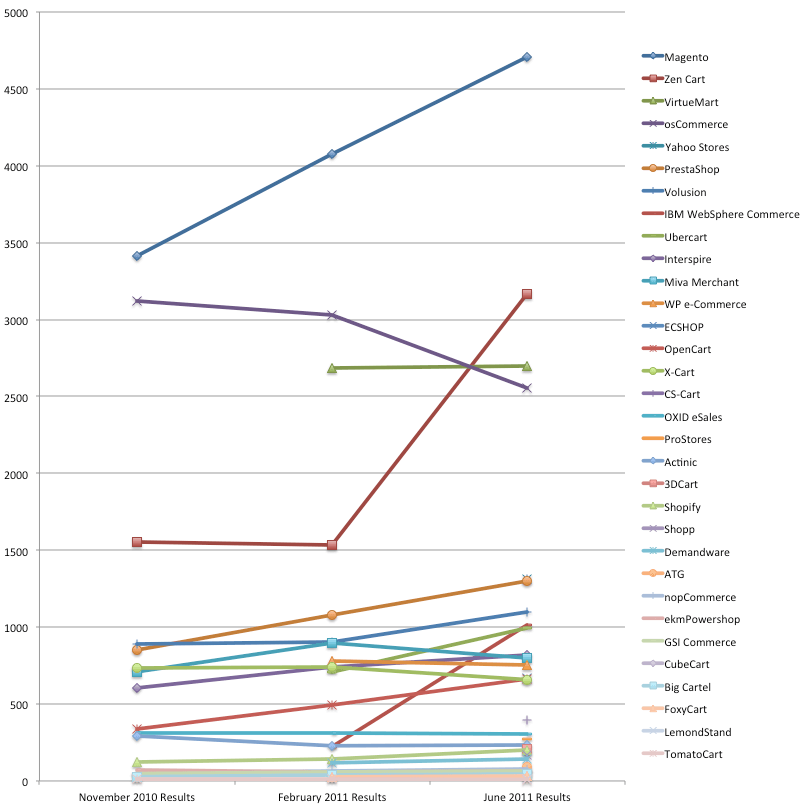 Once again, the analysis will be re-conducted in around 3 months, so we’ll see if Magento can retain or perhaps even extend their lead. I’m sure eBay would certainly expect so.

Comments on this survey and suggestions for further enhancements or alternative investigations are very welcome. You can leave a comment, email me via the link below, or get in touch on twitter: @bobbyshaw.